A check valve, non-return valve, reflux valve, retention valve, foot valve, or one-way valve is a valve that normally allows fluid (liquid or gas) to flow through it in only one direction.[1]

A check valve, non-return valve, reflux valve, retention valve, foot valve, or one-way valve is a valve that normally allows fluid (liquid or gas) to flow through it in only one direction.[1]

Check valves are two-port valves, meaning they have two openings in the body, one for fluid to enter and the other for fluid to leave. There are various types of check valves used in a wide variety of applications. Check valves are often part of common household items. Although they are available in a wide range of sizes and costs, check valves generally are very small, simple, and inexpensive. Check valves work automatically and most are not controlled by a person or any external control; accordingly, most do not have any valve handle or stem. The bodies (external shells) of most check valves are made of plastic or metal.

An important concept in check valves is the cracking pressure which is the minimum differential upstream pressure between inlet and outlet at which the valve will operate. Typically the check valve is designed for and can therefore be specified for a specific cracking pressure.

Cracking pressure – Refers to the minimum pressure differential needed between the inlet and outlet of the valve at which the first indication of flow occurs (steady stream of bubbles). Cracking pressure is also known as unseating head (pressure) or opening pressure.[2]

Reseal pressure – Refers to the pressure differential between the inlet and outlet of the valve during the closing process of the check valve, at which there is no visible leak rate. Reseal pressure is also known as sealing pressure,[3] seating head[4] (pressure) or closing pressure.[5]

Ball check valves are often very small, simple, and cheap. They are commonly used in liquid or gel minipump dispenser spigots, spray devices, some rubber bulbs for pumping air, etc., manual air pumps and some other pumps, and refillable dispensing syringes. Although the balls are most often made of metal, they can be made of other materials; in some specialized cases out of highly durable or inert materials, such as sapphire. High pressure HPLC pumps and similar applications commonly use small inlet and outlet ball check valves with balls of (artificial) ruby and seats made of sapphire[6] or both ball and seat of ruby,[7] for both hardness and chemical resistance. After prolonged use, such check valves can eventually wear out or the seat can develop a crack, requiring replacement. Therefore, such valves are made to be replaceable, sometimes placed in a small plastic body tightly-fitted inside a metal fitting which can withstand high pressure and which is screwed into the pump head.

There are similar check valves where the disc is not a ball, but some other shape, such as a poppet energized by a spring. Ball check valves should not be confused with ball valves, which is a different type of valve in which a ball acts as a controllable rotor to stop or direct flow.

The flapper valve in a flush-toilet mechanism is an example of this type of valve. Tank pressure holding it closed is overcome by manual lift of the flapper. It then remains open until the tank drains and the flapper falls due to gravity. Another variation of this mechanism is the clapper valve, used in applications such firefighting and fire life safety systems. A hinged gate only remains open in the inflowing direction. The clapper valve often also has a spring that keeps the gate shut when there is no forward pressure. Another example is the backwater valve (for sanitary drainage system) that protects against flooding caused by return flow of sewage waters. Such risk occurs most often in sanitary drainage systems connected to combined sewerage systems and in rainwater drainage systems. It may be caused by intense rainfall, thaw or flood.

A lift-check valve is a check valve in which the disc, sometimes called a lift, can be lifted up off its seat by higher pressure of inlet or upstream fluid to allow flow to the outlet or downstream side. A guide keeps motion of the disc on a vertical line, so the valve can later reseat properly. When the pressure is no longer higher, gravity or higher downstream pressure will cause the disc to lower onto its seat, shutting the valve to stop reverse flow.

An in-line check valve is a check valve similar to the lift check valve. However, this valve generally has a spring that will 'lift' when there is pressure on the upstream side of the valve. The pressure needed on the upstream side of the valve to overcome the spring tension is called the 'cracking pressure'. When the pressure going through the valve goes below the cracking pressure, the spring will close the valve to prevent back-flow in the process.[10]

A duckbill valve is a check valve in which flow proceeds through a soft tube that protrudes into the downstream side. Back-pressure collapses this tube, cutting off flow.

A reed valve is a check valve formed by a flexible flat sheet that seals an orifice plate. The cracking pressure is very low, the moving part has low mass allowing rapid operation, the flow resistance is moderate, and the seal improves with back pressure. These are commonly found in two stroke internal combustion engines as the air intake valve for the crankcase volume and in air compressors as both intake and exhaust valves for the cylinder(s). Although reed valves are typically used for gasses rather than liquids, the Autotrol brand of water treatment control valves are designed as a set of reed valves taking advantage of the sealing characteristic, selectively forcing open some of the reeds to establish a flow path.[11]

A flow check is a check valve used in hydronic heating and cooling systems to prevent unwanted passive gravity flow. A flow check is a simple flow lifted gravity closed heavy metal stopper designed for low flow resistance, many decades of continuous service, and to self-clean the fine particulates commonly found in hydroninc systems from the sealing surfaces. To accomplish self cleaning, the stopper is typically not conical. A circular recess in a weight that fits over a matching narrow ridge at the rim of an orifice is a common design. The application inherently tolerates a modest reverse leakage rate, a perfect seal is not required. A flow check has an operating screw to allow the valve to be held open, the opposite of the control on a stop-check valve, as an aide for filling the system and for purging air from the system. [12]

Multiple check valves can be connected in series. For example, a double check valve is often used as a backflow prevention device to keep potentially contaminated water from siphoning back into municipal water supply lines. There are also double ball check valves in which there are two ball/seat combinations sequentially in the same body to ensure positive leak-tight shutoff when blocking reverse flow; and piston check valves, wafer check valves, and ball-and-cone check valves. 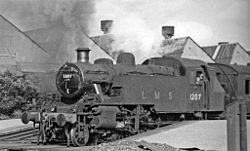 The check valves on this steam locomotive are located under the small cover between the chimney and the main dome.

Check valves are also used in the pumps that supply water to water slides. The water to the slide flows through a pipe which doubles as the tower holding the steps to the slide. When the facility with the slide closes for the night, the check valve stops the flow of water through the pipe; when the facility reopens for the next day, the valve is opened and the flow restarts, making the slide ready for use again.[13]

Check valves are used in many fluid systems such as those in chemical and power plants, and in many other industrial processes.

Check valves are also often used when multiple gases are mixed into one gas stream. A check valve is installed on each of the individual gas streams to prevent mixing of the gases in the original source. For example, if a fuel and an oxidizer are to be mixed, then check valves will normally be used on both the fuel and oxidizer sources to ensure that the original gas cylinders remain pure and therefore nonflammable.

In 2010, NASA's Jet Propulsion Laboratory slightly modified a simple check valve design with the intention to store liquid samples indicative to life on Mars in separate reservoirs of the device without fear of cross contamination.[17]

When a sanitary potable water supply is plumbed to an unsanitary system, for example lawn sprinklers, a dish washer or a washing machine, a check valve called a backflow preventer is used to prevent contaminated water from re-entering the domestic water supply.

Some types of irrigation sprinklers and drip irrigation emitters have small check valves built into them to keep the lines from draining when the system is shut off.

Rainwater harvesting systems that are plumbed into the main water supply of a utility provider may be required to have one or more check valves fitted to prevent contamination of the primary supply by rainwater.

Hydraulic jacks use ball check valves to build pressure on the lifting side of the jack.

Check valves are commonly used in inflatables, such as toys, mattresses and boats. This allows the object to be inflated without continuous or uninterrupted air pressure.